During the Summer, the TANGO2 Research Foundation’s leadership team met with the Broad Institute of MIT (Massachusetts Institute of Technology) and Harvard.  Broad is an independent research institution dedicated to accelerating the pace at which the world conquers disease. They completed a  TANGO2 disease prevalence study by curating, classifying and analyzing the various TANGO2 disease variants.  Prevalence (or frequency of occurrence) of a condition is an important decision- making factor used by researchers and pharmaceutical companies to determine goals and resource allocation toward the condition. Disease prevalence helps us understand how many cases of TANGO2 disease are present globally and in specific sub-populations.

Their findings showed  an estimated global carrier frequency of 1/566 and a disease prevalence of 1 in 1,282,795 for TANGO2 disease. The conservative estimate for the number of individuals with TANGO2 related disease based on the 2019 world population of 7.7 billion is 6003 and the relaxed estimate is 6859.

Notable subpopulation prevalence and carrier rates are as follows:

It was also reported that the increased prevalence in the Other category was due to the TANGO2 variant called GLY154Arg variant. As a result of this study, there is further work underway around the this variant that will be discussed in a future blog post. The Foundation is hopeful that we can target specific areas and populations for disease awareness and shorten the diagnostic odyssey for families.

Special thanks to the Chan Zuckerberg Institute for supporting the disease prevalence study as it was the catalyst for getting this initiative underway and it will save lives and improve outcomes for children in Mexico and Latin America. 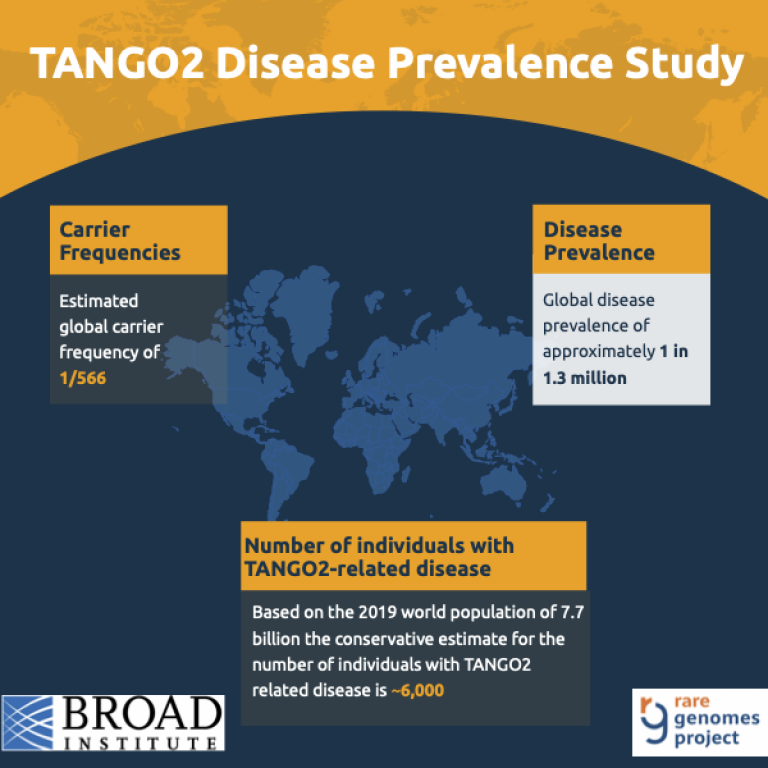