A Big Sister with a Big Heart

Sammy is a 17 year old young man with TANGO2 disease. His big sister Laura has seen Sammy struggle all of his life with symptoms and limitations that made him different. But she treated him no differently than other siblings with the usual sibling rivalry of ups and downs laced with love. As she has gotten older, Laura has developed a better understanding of the magnitude of  TANGO2. Soon after Sammy had his most recent seizure, Laura heard her parents talking about the newly formed TANGO2 Research Foundation. Laura decided she wanted to raise funds as an alternative to receiving birthday gifts for her upcoming birthday. Their mother Maricela Lopez said, “Laura is a very kind-hearted girl by nature so I wasn’t surprised that she wanted to do something like this for her baby brother.”

Laura quickly went to work asking her employer if she could set up a display at the entrance of the daycare where she works.   She then asked on social media and found someone willing to make shirts for a minimal price. She had a display table set up with balloons, brochures, shirts and a laptop playing videos of other TANGO2 children from the Foundation website. With each purchase of a shirt people also earned a chance to win two tickets to an Astros game.

Laura’s birthday gift of giving was a huge success! She earned over $2000 that was donated to the TANGO2 Research Foundation whose mission is to help fund, coordinate and guide scientific research that leads to a better understanding of how TANGO2 mutations affect people at the most basic levels.

If you would like to get involved with the Tango2 Research Foundation please visit the website at tango2research.org. 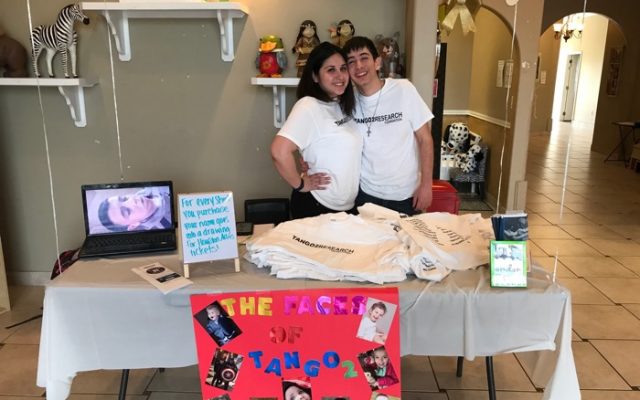